Quite simply, a Living Card Game (LCG) is a term coined and trademarked by Fantasy Flight Games to describe several games in their expanding library of card games. Unlike a collectible card game, LCGs are sold in set, predefined boxes and packs. There are no random cards or rarities so players will all get the same exact cards in each release. Since, Fantasy Flight owns the market in LCGs, all the games listed below are or were published by them.

With any game, and LCGs are no exception, there are advantages and disadvantages to owning them.

All that being said, here are what I consider to be my Top Living Card Games:

Every game of Marvel Champions invites you to play as an iconic Marvel hero, complete with their own 40-50 card deck. Just one Core Set allows four players to team up with their own heroes, and gives you a complete playset of cards right out of the box! Once all players have selected their hero, they choose a scenario—taking on a nefarious Marvel villain and their matching scheme. Although each villain brings their own allies and tactics to the scenario, these scenarios can also be customized with additional modular encounters to increase the challenge of a fight or mix up the forces arrayed against you.

Each villain and scheme has multiple forms, shifting the momentum and the rules of the fight as the villain continues to enact their plans and the heroes attempt to defeat them. Let the scheme advance enough times and the heroes will lose the game. But if you can fight through the villain’s various forms and completely deplete their hit points, your team of heroes emerge as champions!

With all the Marvel content in movies and on Netlfix, it’s no surprise this game is as popular as it is. Even though a completionist can get every hero and eery pack as the game evolves, some may only buy the superheroes they like and skip others as this will not affect game play. The story building here is weak but for a tense, action-filled experience with your favorite Marvel hero, you can’t go wrong here.

In Arkham Horror: The Card Game, after you’ve assumed your role as investigator and prepared your deck of resources, you’re ready to embark upon a series of strange and mysterious adventures.

Instead of trying to defeat other players, the goal of Arkham LCG is to successfully unearth the secrets of the Ancient Ones, their minions, their cults, and the unfathomable evils that they’re perpetrating within the streets of Arkham. In order to do this, you must find a way to gather enough clues that you can solve the mystery immediately before you. This is done by exploring locations, discovering the clues they hold, and using those clues to advance the act deck.

Based on the writings of H.P. Lovecraft, this game has lots of story building as you progress through each adventure. The art is fantastic and evocative of Lovecraft and horror, and may not be necessarily suited to small children who may look over your shoulder. So, be aware of that. I am personally a big fan of Lovecraft and his work, so this game was great for me. There is a lot fo content here and it will take me a long time to get through it all. 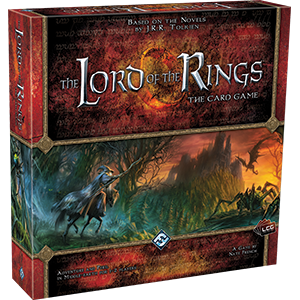 In The Lord of the Rings: The Card Game, you and your friends take on the roles of heroes attempting to complete dangerous quests. Instead of directly retelling the classic stories that have previously been narrated, this game provides you with a variety of elements—characters, settings, enemies, events, items, artifacts, scenarios—that allow you to embark upon new adventures and share new experiences with these beloved characters during this ominous period of Middle-earth’s history.

Unlike most card games in which the players compete against each other, The Lord of the Rings: The Card Game is a cooperative game in which you and your friends work together, competing against a scenario that is run automatically by the game. In each game, you attempt to overcome the particular encounters, enemies, and challenges of the scenario, against which you either win or lose together. Accordingly, each player gains the freedom to choose which role he will play and how he will contribute to the group’s overall success.

My first foray into LCGs was Lord of the Rings. While I enjoyed it, I am not that big a fan of fantasy although I do like LotR. Sounds like an oxymoron, I know. If you love fantasy, then this game is for you. There is so much content here it is insane. This game was the basis for everything that came after from Fantasy Flight but still rock solid.

For more information on any of these games, you can check out the links below at the publisher’s web site.